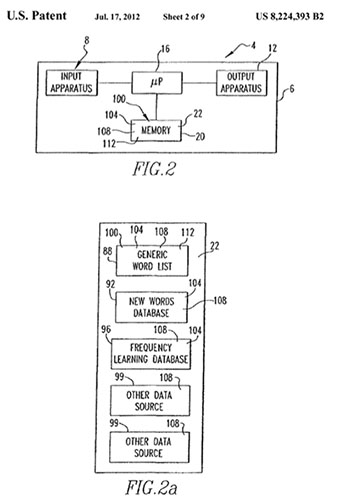 RIM has been awarded the patent for the “handheld electronic device with text disambiguation.” This is the BlackBerry 10 keyboard that has been shown off by RIM since BlackBerry World 2012. We have already seen an iOS version for jailbroken iPhones but it looks like we won’t be seeing this technology on any other devices, which I think is really beneficial for RIM.

This is how RIM describes this keyboard:

A handheld electronic device includes a reduced QWERTY keyboard and is enabled with disambiguation software. The device provides output in the form of a default output and a number of variants. The output is based largely upon the frequency, i.e., the likelihood that a user intended a particular output, but various features of the device provide additional variants that are not based solely on frequency and rather are provided by various logic structures resident on the device. The device enables editing during text entry and also provides a learning function that allows the disambiguation function to adapt to provide a customized experience for the user. The disambiguation function can be selectively disabled and an alternate keystroke interpretation system provided. Additionally, the device can facilitate the selection of variants by displaying a graphic of a special key of the keypad that enables a user to progressively select variants generally without changing the position of the user’s hands on the device.

Source via: USPTO and Engadget