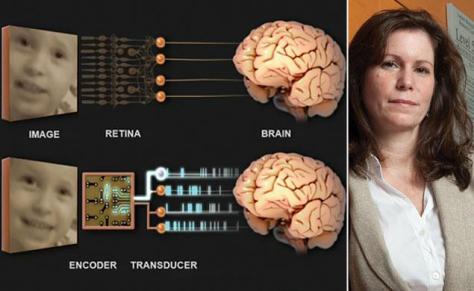 Photo from Ubergizmo: Dr. Sheila Nirenberg (On the Right)

A Neuroscientist, Dr. Sheila Nirenberg, has developed a technique that uses a camera and a processor to replace defective organic visual organs. She said the majority of the medical condition of being blind or near-blind was induced by a damage to the Retina.

She has restored sight to mice that went from being completely blind to being able to visually track moving objects, using this technique and device. She bypass’ the damaged organic elements by using electronic parts like camera sensors.

Similar techniques have been tried, using camera CMOS sensors. But what’s different about this particular technique is that Dr. Sheila Nirenberg lets the Ganglion Cells do the transcoding light into brain-compatible signals.

Bypassing the damaged organic elements isn’t the hard part, it was to make the ganglion cells that are in the retina work with the synthetic apparatus. They form a layer in the retina and are responsible for turning light into an electric signal that is understood by the brain.

Dr Nirenberg presented her research at Ted, watch the video of that Here