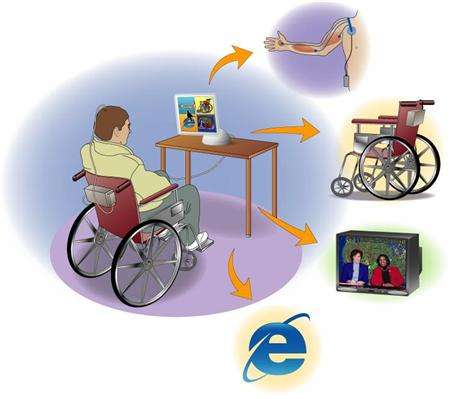 With all the new technology coming out that take advantage of the use of eyes and gestures, especially to help the bedridden and disabled, there is now a pair of brain interface glasses that can be used to control computers. These glasses cost only $65 to produce.

The user controls the computer with the glasses using their eyes, moving the cursor around just as though there was a conventional mouse in place. These glasses came from PhD. student William Abbott and his lecturer, a lecturer of Neurotechnology at Imperial College, Dr. Aldo Faisal from no more than off-the-shelf materials.

According to Dr. Aldo Faisal, “This system consists of basically two things. One is a device, a piece of hardware which is basically an eye tracking system that William is wearing here on his head. This basically consists of two sets of very fast cameras that record the movements of the eyes and enable us to work out where on the screen William is looking. And the other part of the script is smart software that basically decodes the intentions that William has about interacting with the computer and translates them into commands that enable them to control the computer just by using his eyes.”

These glasses only require just one watt of power and being able to transmit data wirelessly, this could open up a whole new frontier for the bedridden and disabled. The computer is developed so that all controls are done using voluntarily controls and involuntary winking will be ignored.