DARPA has begun development of a wireless communications link that is capable of 100 gigabits per second over a range of 200 kilometers (124mi). Officially dubbed “100 Gb/s RF Backbone” (or 100G for short), the program will provide the US military with networks that are around 500 times faster than its current wireless links.

In essence, DARPA wants to give deployed soldiers the same kind of connectivity as a high-bandwidth, low-latency fiber-optic network. In the case of Afghanistan, for example, the US might have a high-speed fiber link to Turkey — but the remaining 1,000 miles to Afghanistan most likely consists of low-bandwidth, high-latency links. It’s difficult (and potentially insecure) to control UAVs or send/receive intelligence over these networks, and so the US military instead builds its own wireless network using Common Data Link.

Common Data Link (CDL) is a secure wireless protocol that networks together a US military deployment, for shuttling around imagery, intelligence, orders, and so on. UAVs, aircraft carriers, helicopters, forward operating bases — they’re all connected together via wireless CDL links, bounced via high-altitude aircraft or orbiting satellites. Exact, up-to-date specs are hard to come by, but it seems like the US military’s existing CDL links max out at around 250Mbps. DARPA now wants to push these speeds up to 100Gbps, while using equipment that retains the same weight/power requirements of CDL — i.e. these 100G systems must be deployable in the field.

Suffice it to say, transmitting 100Gbps through the air is rather difficult; your home WiFi network probably maxes out at around 100Mbps, some thousand times slower. We’ve written about visible light links that operate at speeds up to 2.5Tbps — but only over a distance of one meter. Free-space optical communication isn’t viable though, because clouds tend to get in the way when you’re talking about 200-kilometer-long links. The only real option is RF, but again, transmitting 100Gbps over a 200-kilometer RF link is very tough.

The only RF link that is really comparable is ViaSat-1, a geosynchronous Ka-band communications satellite that sits above the USA, which has a total capacity of 134Gbps — but that’s the combined total of 56 Ka transponders, so the actual bandwidth per link is much lower. In all likelihood, DARPA’s 100G program will probably use the lower-frequency Ku band, which is less susceptible to rain fade (or degradation caused by other inclement atmospheric conditions). Assuming the right encoding/multiplexing techniques can be discovered, there should be plenty of bandwidth in either the Ka or Ku bands to hit 100Gbps. 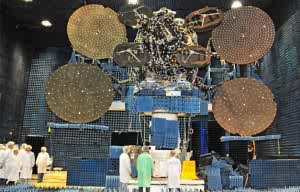 DARPA clearly states that the 100G program is for US military use — but it’s hard to ignore the repercussions it might have on commercial networks, too. I’m surprised that it has fallen to DARPA to develop an ultra-high-speed point-to-point wireless technology. 100Gbps wireless backhaul links between cell towers, rather than costly and cumbersome fiber links, would make it much easier and cheaper to roll out additional mobile coverage. Likewise, 100Gbps wireless links might be the ideal way to provide backhaul links to rural communities that are still stuck with dial-up internet access, or additional backbone bandwidth during peak periods. One day, you might even have a 100Gbps wireless link from your home to your ISP.