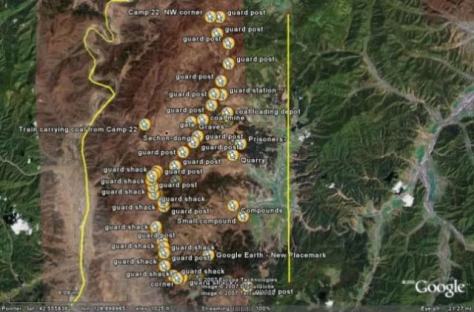 Google’s Eric Schmidt planned to visit North Korea, did just that, and returned days later to say the country needs to embrace an open Internet. Seeing how Google Earth was used in order to pinpoint North Korean labor camps, we’re not entirely sure if the country would be all for an open Internet if they ever discover their camps have been ousted.

A combination of human rights activists and bloggers used Google Earth together to highlight dozens of prison camps hidden within North Korea secretive country. The Google Earth map highlights a number of guard posts, shacks, compounds and possible locations for prisoners, which human rights groups estimate there to be as many as 250,000 political prisoners. Coal mines and crude burial grounds have also been highlighted on the map.

It’s incredible what Google Earth has been capable of in just last year alone as we were able to take a virtual voyage of the Titanic and even clear landmines with its help, but until North Korea decides to open its grip to allow for those outside of the country to enter it as freely as any other, then unfortunately there’s not much Google Earth users can do with with layouts for North Korean labor camps.