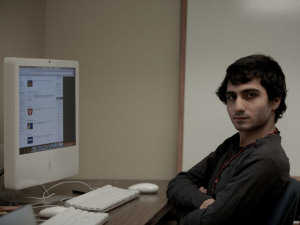 A student has been expelled from Montreal’s Dawson College after he discovered a flaw in the computer system used by most Quebec CEGEPs, one which compromised the security of over 250,000 students’ personal information.

Ahmed Al-Khabaz, a 20-year-old computer science student at Dawson and a member of the school’s software development club, was working on a mobile app to allow students easier access to their college account when he and a colleague discovered what he describes as “sloppy coding” in the widely used Omnivox software which would allow “anyone with a basic knowledge of computers to gain access to the personal information of any student in the system, including social insurance number, home address and phone number, class schedule, basically all the information the college has on a student.”

“I saw a flaw which left the personal information of thousands of students, including myself, vulnerable,” said Mr. Al-Khabaz. “I felt I had a moral duty to bring it to the attention of the college and help to fix it, which I did. I could have easily hidden my identity behind a proxy. I chose not to because I didn’t think I was doing anything wrong.”

After an initial meeting with Director of Information Services and Technology François Paradis on Oct. 24, where Mr. Paradis congratulated Mr. Al-Khabaz and colleague Ovidiu Mija for their work and promised that he and Skytech, the makers of Omnivox, would fix the problem immediately, things started to go downhill.

Two days later, Mr. Al-Khabaz decided to run a software program called Acunetix, designed to test for vulnerabilities in websites, to ensure that the issues he and Mija had identified had been corrected. A few minutes later, the phone rang in the home he shares with his parents.

“It was Edouard Taza, the president of Skytech. He said that this was the second time they had seen me in their logs, and what I was doing was a cyber attack. I apologized, repeatedly, and explained that I was one of the people who discovered the vulnerability earlier that week and was just testing to make sure it was fixed. He told me that I could go to jail for six to twelve months for what I had just done and if I didn’t agree to meet with him and sign a non-disclosure agreement he was going to call the RCMP and have me arrested. So I signed the agreement.”

The agreement prevented Mr. Al-Kabaz from discussing confidential or proprietary information he found on Skytech servers, or any information relating to Skytech, their servers or how he accessed them. The agreement also prevented Mr. Al-Kabaz from discussing the existence of the non-disclosure pact itself, and specified that if his actions became public he would face legal consequences.

When reached for comment Mr. Taza acknowledged mentioning police and legal consequences, but denied having made any threats, and suggested that Mr. Al-Khabaz had misunderstood his comments.

“All software companies, even Google or Microsoft, have bugs in their software,” said Mr. Taza. “These two students discovered a very clever security flaw, which could be exploited. We acted immediately to fix the problem, and were able to do so before anyone could use it to access private information.”

Taza explained that he was quite pleased with the work the two students did identifying problems, but the testing software Mr. Al-Khabaz ran to verify the system was fixed crossed a line.

“This type of software should never be used without prior permission of the system administrator, because it can cause a system to crash. He [Al-Khabaz] should have known better than to use it without permission, but it is very clear to me that there was no malicious intent. He simply made a mistake.”

“I was called into a meeting with the co–ordinator of my program, Ken Fogel, and the dean, Dianne Gauvin,” says Mr. Al-Khabaz. “They asked a lot of questions, mostly about who knew about the problems and who I had told. I got the sense that their primary concern was covering up the problem.”

Following this meeting, the fifteen professors in the computer science department were asked to vote on whether to expel Mr. Al-Khabaz, and fourteen voted in favour. Mr. Al-Khabaz argues that the process was flawed because he was never given a chance to explain his side of the story to the faculty. He appealed his expulsion to the academic dean and even director-general Richard Filion. Both denied the appeal, leaving him in academic limbo.

“I was acing all of my classes, but now I have zeros across the board. I can’t get into any other college because of these grades, and my permanent record shows that I was expelled for unprofessional conduct. I really want this degree, and now I won’t be able to get it. My academic career is completely ruined. In the wrong hands, this breach could have caused a disaster. Students could have been stalked, had their identities stolen, their lockers opened and who knows what else. I found a serious problem, and tried to help fix it. For that I was expelled.”

“Dawson has betrayed a brilliant student to protect Skytech management,” said Ms. Crockett. “It’s a travesty that Ahmad’s academic future has been compromised just so that Dawson and Skytech could save face. If they had any sense of decency, they would reinstate Ahmad into [the] computer science [program], refund the financial aid debt he has incurred as a result of his expulsion and offer him a full public apology “

Repeated calls to various members of the Dawson administration were not returned, with the college citing an inability to discuss an individual student’s case on legal and ethical grounds in a statement released by their communications department.