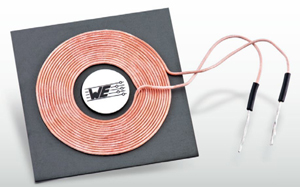 At CES 2013, the Wireless Power Consortium displayed dozens of devices that were designed to the Qi wireless charging standard, suggesting that 2013 may be the year wireless charging becomes a feature consumers expect to come standard in new smartphones.

Nokia and HTC already offer smartphones with Qi technology integrated directly, such as the Lumia 920 and Droid DNA. For more popular smartphones that were not developed with Qi compatibility, including Apple’s iPhone 5 and Samsung’s Galaxy S3, third-party manufacturers have developed smartphone cases with integrated Qi technology. The cases themselves plug into the phone’s power dock and relay a charge received when the encased phone is placed on a wireless power source.

Further facilitating the rise of wireless charging is the Qi standard’s compatibility. Although manufacturers can build wirelessly charging devices on their own, the standard dictates that all Qi-enabled devices are compatible with all Qi-enabled power sources. That means a wireless charging pad developed by Nokia could charge a smartphone built by HTC, and so on. Best of all, it means smartphone users will never again need to scramble for a power cord that fits into the custom-designed power dock on their phones.

But what does the impending rise of wirelessly charging smartphones have to do with the growth of near-field communications (NFC) technology?

At CES, the WPC booth also displayed several new components designed to facilitate the integration of the Qi wireless charging technology. One component on display, developed by TDK, integrated both Qi wireless technology and NFC into a single chip.

“The beauty of Qi is that the receiver actually is very simple and low in cost; that has been the objective as mobile phone OEMs demand ultra-low-cost adders,” Fransen says. “So, indeed, once those chips are ready, it will be simple for mobile phone OEMs to integrate Qi and NFC.”

Some smartphones already feature both NFC and Qi. At CES, Fransen placed an NFC/Qi-enabled smartphone on top of a similarly outfitted JBL boombox, which charged the device while streaming audio through its speakers wirelessly.

However, the Qi and NFC technologies were integrated separately in the manufacturing process of some of these devices, which is why phones that boast both capabilities have been so rare to this point. But as manufacturers look to set their devices apart from those of their competitors, Fransen says the integration of NFC and wireless charging will become a common trend by the second half of 2013.

The integration is relatively simple, Fransen says. The NFC and Qi systems will simply operate “next to each other on one single ‘die.'” The result will be a less expensive method by which manufacturers can tout new capabilities on their products.

“The easier and cheaper we all make it for mobile phone OEMs, the faster technologies get adopted,” Fransen says.

Of course, some obstacles still stand in the way. Near-field communications has long been touted as the future of mobile payments, but while Google Wallet uses the technology for its smartphone payment technology, Apple famously passed on the technology for its mobile payment app on the iPhone 5. At the time, Apple Senior Vice President Phil Schiller told All Things D that NFC does not necessarily solve any current problems smartphone users face. Considering that the technology had already been criticized by eBay CEO John Donahoe, who has joked that NFC should stand for “Not For Commerce,” the snub likely did not improve public opinion on the technology.

Steve Goacher, business development manager for wireless power at Texas Instruments, says “there is no reason why these two solutions cannot be combined.” However, he points out that integrating NFC and Qi technologies could result in efficiency and cost of the final solution, if it’s not perfected before the component is shipped.

Consumers will also need to find places to use NFC. In order for an NFC-enabled device to complete a transaction, it needs to be scanned by an NFC reader. That means merchants will need to jump onboard as well.

This process will take some time, but the shift is indeed expected to happen. Gartner predicts a 42% annual growth rate for mobile payment transactions will result in a $617 billion market of 448 million users by 2016.

“NFC payment involves a change in user behavior and requires collaboration among stakeholders that includes banks, mobile carriers, card networks and merchants,” Sandy Shen, research director at Gartner, said in a May 2012 report. “It takes time for both to happen, so we don’t expect NFC payments to come into the mass market before 2015. In the meantime, ticketing, rather than retail payment, will drive NFC transactions.”