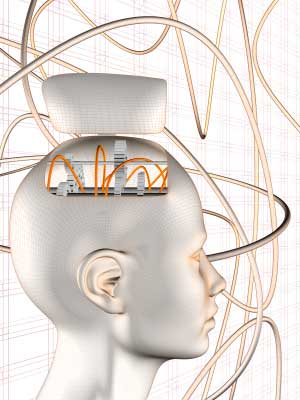 The generation gap has been upgraded. In a world brimming with ever-advancing technology, the generations are now separated by a “brain gap” between young “digital natives” and older “digital immigrants,” according to Dr. Gary Small, director of UCLA’s Memory and Aging Research Center at the Semel Institute for Neuroscience and Human Behavior, and UCLA’s Parlow-Solomon Chair on Aging.

“We know that technology is changing our lives. It’s also changing our brains,” Small said during a recent Open Mind lecture for the Friends of the Semel Institute, a group that supports the institute’s work in researching and developing treatment for illnesses of the mind and brain. Small’s talk centered around his recently published book, “iBrain: Surviving the Technological Alteration of the Modern Mind.”

The human brain is malleable, always changing in response to the environment, Small said. “A young person’s brain, which is still developing, is particularly sensitive. … It’s also the kind of brain that is most exposed to the new technology.”

Digital natives — young people born into a world of laptops and cell phones, text messaging and twittering — spend an average of 8 1/2 hours each day exposed to digital technology. This exposure is rewiring their brain’s neural circuitry, heightening skills like multi-tasking, complex reasoning and decision-making, Small said. But there’s a down side: All that tech time diminishes “people” skills, including important emotional aptitudes like empathy.

On the opposite end of the spectrum, digital immigrants, born into a world of pocket calendars you penciled dates into and letters that got sent in the mail, have to work hard to embrace technology without the already-developed brain form and function. The good news, Small said, is that the flexible brain is eminently trainable.

He cited a recent UCLA study that assessed the effect of Internet searching on brain activity among volunteers between the ages of 55 and 76 — half of them well-practiced in searching the Internet, the other half not so. Semel Institute researchers used functional magnetic resonance imaging (fMRI) to scan the subjects’ brains while they surfed the ‘Net. The result: Researchers found that the brains of the Web-savvy group reflected about twice as much activity compared to the brains of those who were not Web-savvy.

“A simple, everyday task like searching the Web appears to enhance brain circuitry in older adults,” Small said, “demonstrating that our brains are sensitive and can continue to learn as we grow older.”

These findings hold promise for older peoples’ potential for enhancing their brainpower through the use of technology, said Small, an expert on the aging brain who has written several books to help people maintain vital brain function throughout their lives.

In “iBrain,” his latest book, Small offers a Technology Toolkit that introduces some of the latest technology to digital immigrants. He also urges digital natives — and plugged-in digital immigrants — to cultivate their one-on-one people skills by making a conscious effort to unplug themselves from the computer and spend more time with friends and family.

To read more about his research, go to UCLA Newsroom

Children as young as 11 years old are writing malicious computer code to hack accounts on gaming sites and social networks, experts have said.

In one case, researchers were able to reverse-engineer “amateur” code to reveal data about the identity of one child in Canada.

The company said children must be educated on coding “rights and wrongs”.

“As more schools are educating people for programming in this early stage, before they are adults and understand the impact of what they’re doing, this will continue to grow.” said Yuval Ben-Itzhak, chief technology officer at AVG.

The researchers found that many instances of malware targeting games popular with children shared the same characteristics.

Most were written using basic coding languages such as Visual Basic and C#, and were written in a way that contain quite literal schoolboy errors that professional hackers were unlikely to make – many exposing the original source of the code.

The team examined closely one particular instance of code that masqueraded as a cheat program for gamers playing Runescape, an online title that has over 200 million signed-up players.

The program, Runescape Gold Hack, promised to give the gamer free virtual currency to use in the game – but it in fact was being used to steal log-in details from unsuspecting users.

“When the researchers looked at the source code we found interesting information,” explained Mr Ben-Itzhak to the BBC.

“We found that the malware was trying to steal the data from people and send it to a specific email address.”

“The malware author included in that code the exact email address and password and additional information – more experienced hackers would never put these type of details in malware.”

That email address belonged, Mr Ben-Itzhak said, to an 11-year-old boy in Canada.

Enough information was discoverable, thanks to the malware’s source code, that researchers were even able to find out which town the boy lived in – and that his parents had recently treated him to a new iPhone.

Many schools around the world are changing education programmes in schools to teach children to code, rather than simply to use, computers.

In the UK, several after-school clubs have been set up – and initiatives to get kids into programming have been backed by the likes of Google and Microsoft.

Mr Ben-Itzhak said that, as the ability level of children increased, more needed to be done to educate them on how best to use their new skills.

“We cannot tell how many kids around the world are [writing malicious programs], but we believe there are more cases like this.”

“You teach your children that you can’t take a toy without paying – so I think this type of a message needs to get to the kids when they’re writing software too.”

Linda Sandvik is the co-founder of Code Club, an initiative that teaches children aged nine and up how to code.

She told the BBC that the benefits from teaching children to code far outweighed any of the risks that were outlined in the AVG report.

“We teach English, maths and science to all students because they are fundamental to understanding society,” she said.

“The same is true of digital technology. When we gain literacy, we not only learn to read, but also to write. It is not enough to just use computer programs.”