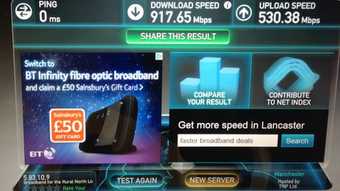 How fast is your home broadband? 70 to 80 Mbps if you’re one of the few with the very fastest fibre broadband services? Perhaps 10Mbps if you’ve got an average connection, maybe under 2Mbps if you live some miles from your nearest exchange. So how would you fancy a 500Mbps download scheme?

That is what I’ve seen on Harry Ball’s quite ancient computer – not in the heart of London but in a village in rural Lancashire. Arkholme is hardly a teeming metropolis but Harry is one of the first local residents to be hooked up to the B4RN community broadband network.

After deciding that they were never likely to get a fast broadband connection from one of the major suppliers, a group of local people across this sparsely populated area decided that sitting around moaning about it was not an option. Instead they began a DIY effort, digging channels across the fields and laying fibre optic cables.

They have exploited all sorts of local expertise – from the Lancaster University professor who is an expert in computer networks to the farmer’s wife who has just retired from a career in IT support. The cooperation of local landowners has been vital – free access to fields has made it much cheaper to roll out the network. BT and other companies which have to dig up the country roads to lay fibre networks reckon it can cost as much as £10,000 to hook up one rural home – the people at B4RN reckon they can bring that down to around £1,000. 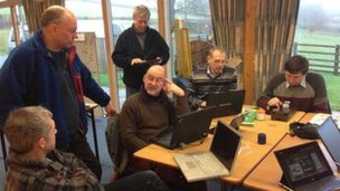 And people like Harry and Susan Ball are now entering the superfast broadband era. The retired couple told me they knew little about computers and had got used to the fact that it was almost impossible on their slow connection to watch video or use Skype. Now Harry is able to watch the iPlayer streaming in HD, and Susan has become a B4RN volunteer, helping to dig trenches for the fibre.

But, after raising half a million pounds from locals who bought shares on the promise of a fast connection, the project now needs to move to the next stage. In the Arkholme village hall this afternoon, B4RN is holding an open day, inviting anyone to drop in and test the broadband connection on their phones or computers.

The hope is that many will sign up to the £30 per month service, but that some will also buy shares in B4RN. Another £1.5m is needed if the full 265KM network is to be rolled out. That sounds ambitious – but having spent 24 hours watching the volunteers digging trenches, blowing fibre and learning a process called fusion splicing I can see they are a very determined bunch.

As Barry Forde, the networking expert who is the chief executive of B4RN explained to me, fast broadband is not a luxury now, whether in the town or the country. “Farmers are being told they have to fill in forms online,” he says. “If you haven’t got broadband you are severely disadvantaged.”

And despite the £530m government money to bring fast broadband to rural Britain, many communities face a long wait to get connected. In the meantime, others may learn the lesson from B4RN – if you want it in a hurry, just get out and start digging.