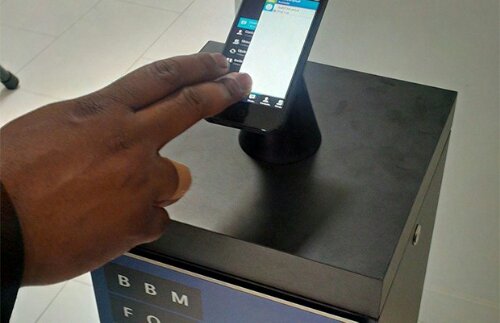 BlackBerry is gearing up to launch cross-platform BBM for iOS and Android. Although, there seems to have been a little bit of a drawback on getting BBM approved by Apple, but BlackBerry intends to launch BBM this month.

If you had attended the BlackBerry Experience at the Toronto International Film Festival, you might have gotten an early glimpse of BBM running on an iPhone 5 and Samsung Galaxy S4.

This is the first time we’ve seen BBM glimpsed on an iPhone, aside from the featured image we used in this article. Nevertheless, as expected, the UI for BBM on iOS and Android looks nearly identical as that on BlackBerry 10.

Stay tuned as BlackBerry will soon kick off the BBM4ALL campaign once BBM is approved to the Google Play and Apple App Store.