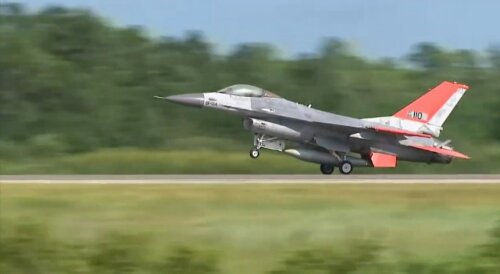 Boeing has announced that it has retrofitted a number of retired Lockheed Martin F-16 fighter jets with equipment enabling them to be flown remotely without a pilot. In conjunction with the US Air Force, the company recently flew one of these unmanned jets, performing combat maneuvers and a perfect center line landing.

The converted F-16, one of many that had been “mothballed” for 15 years at a site in Arizona, was controlled remotely by two US Air Force pilots located at a ground control facility. During the test flight, the plane cruised at 40,000 ft (12,200 m) and reached speeds of Mach 1.47. It then performed a series of maneuvers, including barrel rolls and a “split S” (where the pilot rolls his aircraft upside down and flies a descending half-loop, achieving level flight in the opposite direction at a lower altitude).

The unmanned jet took off from a base in Florida and flew to the Gulf of Mexico, and was trailed at all times by two chase planes monitoring its course. “It flew great, everything worked great, [it] made a beautiful landing – probably one of the best landings I’ve ever seen,” said the project’s chief engineer Paul Cejas. Should the need have arisen however, the F-16 was equipped with a ground-operated self-destruct mechanism.

One of the major advantages of not having a pilot on-board a jet fighter, is the ability to stress the plane to higher limits without fear of losing human life. During this flight however, the aircraft was only tested at 7Gs of acceleration even though an unmanned, fly-by-wire F-16 should be quite capable of performing maneuvers at 9Gs.

Boeing and the US Air Force revealed that the converted F-16s, re-designated as QF-16s, would be used in the training of pilots, providing drones for target practice and live fire tests. “Now we have a mission capable, highly sustainable full scale aerial target to take us into the future,” Lt. Col. Ryan Inman, Commander, 82nd Aerial Targets Squadron, is quoted as saying in a Boeing press release.

The US Air Force has been using jet fighters as target drones since the mid-1970s. Most recently, Phantom F-4s (QF-4) have been re-fitted for this purpose, however the number of F-4 airframes that are capable of being converted without excessive rework is declining. More importantly, the QF-4’s ability to represent the performance of a modern day fighter has decreased over the years. The QF-16 is its newly-designated replacement.

Boeing now has six modified QF-16s and plans an initial low-rate production schedule beginning fourth quarter of this year, for delivery in 2015.

The video below shows the QF-16 unmanned flight, combat maneuvers and landing.