Kris Medlen to have second opinion

Atlanta Braves right-hander Kris Medlen underwent an MRI exam Monday that revealed an “injury to the ligament” in his pitching elbow, according to general manager Frank Wren.

Wren said Medlen will seek a second opinion. According to The Associated Press, he is expected to meet this week with Dr. James Andrews, who performed Tommy John surgery on the pitcher in 2010. 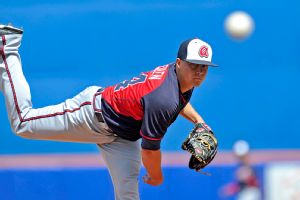 Brad Barr/USA TODAY SportsAn MRI on Kris Medlen’s elbow revealed an “injury to the ligament,” the Braves said. The team will seek a second opinion for its slated Opening Day starter.

“His MRI showed injury to the ligament, but we don’t yet know the extent,” Wren said in a statement. “A diagnosis would be premature at this point. He will undergo further tests until we seek a second opinion. An MRI can…