Gecheng Zha from the University of Miami has been working on the above sideways supersonic plane concept for a while but now he has received $100,000 funding from NASA. He will now have the funding for refining the design, running simulations and do some wind tunnel testing, with the potential for more funding in the future. Though this amazing concept may be decades from becoming a reality.

Basically there are two different configurations for the symmetrical aircraft based on how fast you want to go.

For the plane to sustain flight at lower speeds the plane needs a decent wingspan so it can get off the ground and stay at the normal, subsonic flight.

When you want to go supersonic, the large wings get in the way because of all the drag and resistance created and that’s where the concept’s bi-functional design comes in.

The plane takes flight in the long-winged setup, then spins 90 degrees amongst the clouds to use its stubby wings for efficient faster-than-sound flight and “virtually zero sonic boom.” 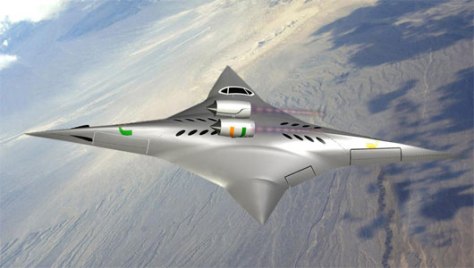