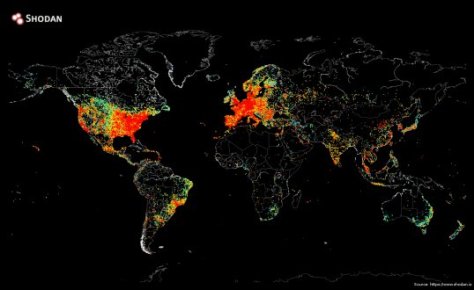 A striking map created by John Matherly at search engine Shodan shows significant disparities in internet access across the world.

The graphic maps every device that’s directly connected to the internet. We first noticed it when geopolitical expert Ian Bremmer tweeted it.

Some of the dark spots on the map could be attributed to low population density in those areas, but by looking at the map it’s clear that internet access isn’t equal across the world.

The different colors indicate the density of devices — blue indicates fewer devices and red indicates more devices at a given location.

As you can see from the map, the US and Europe have very high levels of internet connectivity, with the exception of the less-populated areas of the western US. Africa is mostly an internet blackout, and Asia has much less internet connectivity than Europe and the US despite having very dense population centers in some areas.

Matherly told Business Insider how he put the map together (at least for a tech guy):

The way it was performed is fairly straightforward:

1. Use a stateless scanner to send a Ping request to every public IPv4 address

2. Keep track of which IPs responded with a Pong

3. Find out where the IP is physically located using a GeoIP library (i.e. translates from x.x.x.x -> latitude/ longitude)

Steps 1-3 took about 5 hours and the final step took 12 hours. This is possible because nowadays we have the technology (stateless scanning) to very efficiently talk to millions of devices on the Internet at once.