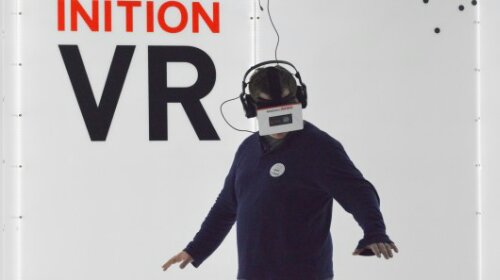 The ledge I’m standing on has a strange existential duality. In the physical realm, it’s a thin strip of red, millimeters above the floor of a pristine white booth in a basement in Shoreditch, London where the 3D tinkerers and technologists (of everything from 3D film to 3D printing) at Inition keep their toys. In the digital realm, which, thanks to the Oculus Rift wrapped around my head, my senses have decided is the more real, the ledge is the only thing between me and a 300-foot plunge.

The voice from the other realm telling me to reach forward with my arms belongs to Inition founder Andy Millns. He’s concerned I’m going to bang my head (or perhaps his Oculus Rift) against the booth wall. That’s easy for him to say. My arms are otherwise engaged in an inept flailing in a simultaneous attempt to not fall off (inside the game, a fail state) or over (inside the booth, an ultra-fail state).

This isn’t Gizmag’s first play with an Oculus Rift. Back in February, Jonathan looked at a pre-launch version. Today, two things are different. Firstly, Inition’s Rift is the finished article (the current developer model, at any rate), and secondly, much more significantly, Inition has wired its Rift up to a Kinect, via a computer running the company’s in-house VR vertigo simulator, that is. To get across that ledge I can’t just push up on a thumbstick, or a W key. I physically have to walk. Or jump, as a previous tester (or perhaps victim) apparently attempted, having abandoned reality outright.

This is proper virtual reality, in other words, albeit it a compact form. The demo begins in a room which, unlike the ledge, I am not free to navigate. I can turn my head, of course, to examine a virtual chandelier, or to look out of a virtual window. As I’d come to hope, latency was all but imperceptible. As I’m impelled across the room by an external force (i.e. someone at Inition operating a keyboard), I come to face a door. The room, it turns out, was at the top of a skyscraper, built very close to another skyscraper which is inevitably though somewhat inexplicably connected by said ledge.

Now I’m free to move, and though, deep down, I’m perfectly content to observe proceedings from the doorway, it seems rude not to try to cross. The Kinect, looking down at me from above, can see the bright red ledge and map my progress across it: Inition’s demo simultaneously Augmented and Virtual Reality. Somehow, I manage to get to the other side without falling, and ready myself for the return journey (all 5 feet of it). But by now the effort of not falling off or falling over is overwhelming, and with one self-righting misstep, I plunge from the ledge and come crashing down to Earth without a thump, there to admire the virtual grass.

It’s great fun, and if I had difficulty, it may have been down to my unwillingness to let go of reality. As I lowered the Rift over my eyes, my brain clung on to the visual memory of the red ledge, conscious that even the minuscule difference in height could cause me to trip. I became convinced, rightly or wrongly, that where the Rift was telling me the ledge was didn’t match its actual location. Practice doubtless helps, but a safe playing environment will be essential for people to immerse themselves fully.

Coincidentally, that’s precisely the intention of Julian Williams, CEO of Wizdish. As part of Inition’s current AR vs VR event, part of the Digital Shoreditch festival, Williams is showing off his invention, which, accompanied by another Kinect sensor and Oculus Rift, lets people navigate a VR space by donning special shoes and sliding their feet over the slippery dish. Spotting an opportunity for more inept flailing, I gave it a whirl. 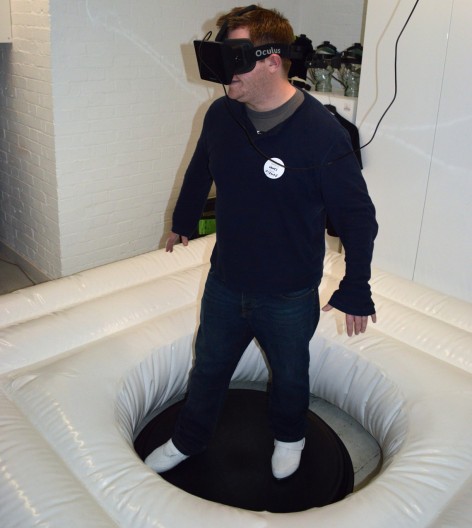 This time a Kinect was trained on my ankles. When detecting a walking motion (or something like it), the demo moved me forward in the direction I was looking. The VR itself was rudimentary, but the point here is that the Wizdish does a good job of allowing users to walk about in a virtual space without the worry of bumping into things. The combination of shoes and Wizdish does take some getting used to, but even the few minutes I spent skidding about the thing were sufficient to tell that using it would soon become second nature. The challenge future games makers face is to get the Kinect to determine which way the gamer is facing.

In one final effort to completely freak me out, Millns introduced me to Mark Lewis of Animazoo, makers of the IGS Glove. It’s an electronic glove which can track the motion of hands and fingers using inertial gyros without need of a camera (or Kinect sensor for that matter). Lewis invited me to place my hand on the “chopping block” in front of me. “You’re not afraid of electric shocks are you?” Millns quipped. He’s such a kidder. Still, I couldn’t help but think “oh dear” as I pulled another Rift over my eyes. At least this time I’d get to sit down.

“Nice statue,” I said, pointing vaguely ahead of me, forgetting that so far as Millns and Lewis were concerned, I was pointing at Julian Williams and his Wizdish at the other side of the room. It was then that I caught a glimpse of my hand, or its digital proxy. “You’ll notice a few fingers are already missing,” said Lewis. Thank you, yes, I had noticed that. What I was only just beginning to notice was the bloodied guillotine just above me.

It would be an exaggeration to say that my rational mind (what there is of it) had to overpower my instincts in order to place my hand under the guillotine, but this demo certainly has the power to disconcert. It’s not so much the drop of the blade as the anticipation of it, though Lewis gently touching my wrist to coincide with the incision of the blade was certainly effective. I had been expecting to lose another finger or two. Instead my whole hand had gone.

If the Oculus Rift demos by Inition and friends tell us anything, it’s that though the device may be well suited to standard video games, it has much greater potential for immersion when combined with a dedicated, safe environment (as with the vertigo demo) or when complemented by other technology like Kinect, the Wizdish and IGS Glove. If there were shortcomings in any of the demos, the limiting factor seemed to be the Kinect, not the Rift. And the Kinect, we’re told, has been greatly improved for Xbox One. Whether it will allow accurate tracking of body motion is perhaps doubtful, but it’s precisely this that the Rift is crying out for. Otherwise, barring a resolution bump or two, the Oculus Rift itself isn’t far away from perfection.