Wikipedia is an almost boundless source of information — as close to a true compendium of human knowledge as we’ve ever come. It’s not very pretty, though, is it? Page after page of black text on a white background, and enough hyperlinks to suck you into a never ending vortex of related articles. Rendering Wikipedia as a nebula is more befitting its true nature, don’t you think? I just so happens there’s a Chrome experiment that does just that, and it’s called WikiGalaxy.

This Wikipedia visualization was created by French computer science student Owen Cornec. Each “star” in WikiGalaxy is a single article on Wikipedia. Highly related articles are placed close to each other in space with connections between them. So if you click on one point of light, you’ll see the text of the article in the left info panel. Over on the right are all the linked articles, which show up on the map as lines connecting the points of light. It’s interesting to see how wide-ranging some of the articles are. The beams of light might be confined to a little corner of the virtual galaxy on one article, then a neighboring page has its tendrils of influence creeping all the way across the map. To get a better feel of your meandering, you can enable the history path, which connects all the articles you’ve clicked on with a green line, winding through the stars.

The map view is the default mode, but you can also dive into fly mode for a more interactive experience. This places you in the middle of the galactic disc, surrounded by articles. The arrow keys move forward, back and side to side. The movement control is good enough, but anyone who has played a 4X game will be missing mouse zoom in map view. It just seems like you should be able to zoom in any out more quickly, and the buttons toward the upper left don’t quite cut it. 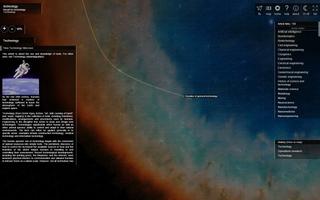 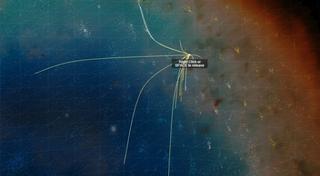 So it’s neat for poking around Wikipedia in a superficial way, but what about reading articles? The preview pane on the left is okay for getting the gist, but you can click on the title for a full page version. You can read through a whole article in this view, but the lack of links and busted table formatting make it less than ideal for in-depth research. Hey, it’s still Wikipedia in galaxy form. What more do you want? If you would like to simply enjoy the interface and click around, there’s a button up top to turn off the UI and get all those boxes out of the way. The beta version only has 100,000 articles, but that’s still a sizeable galaxy.

Cornec’s next project will be to color-code the different article categories so you’ll be able to tell what sort of article each star represents without clicking on it. More stars should be added along the way too. While this is a Chrome experiment running WebGL and HTML5, WikiGalaxy should work in most modern browsers. However, it might not play as nicely with Chrome on Macs. You can blame either Google or Apple for that — take your pick.

For more information and the original story follow the source link below.